Twenty members participated in the annual President’s Run event in beautiful weather on Sunday 22 September. Despite competition from the Big3 American Car show taking place at the Queanbeyan Showgrounds, several of our club’s Big American beauties joined the group who assembled at the carpark on the Kings Highway for a comfortable 10:30am start.

Star attraction in the carpark was Jen and Trudy Fordyce’s Prince Skyline GT – a nippy Japanese GT that had an impressive record in touring car racing, before the company was taken over by Nissan and became the basis of the diverse Nissan Skyline range. The Fordyce’s have recently re-joined the club and this was the car’s first sighting at a CACMC event. 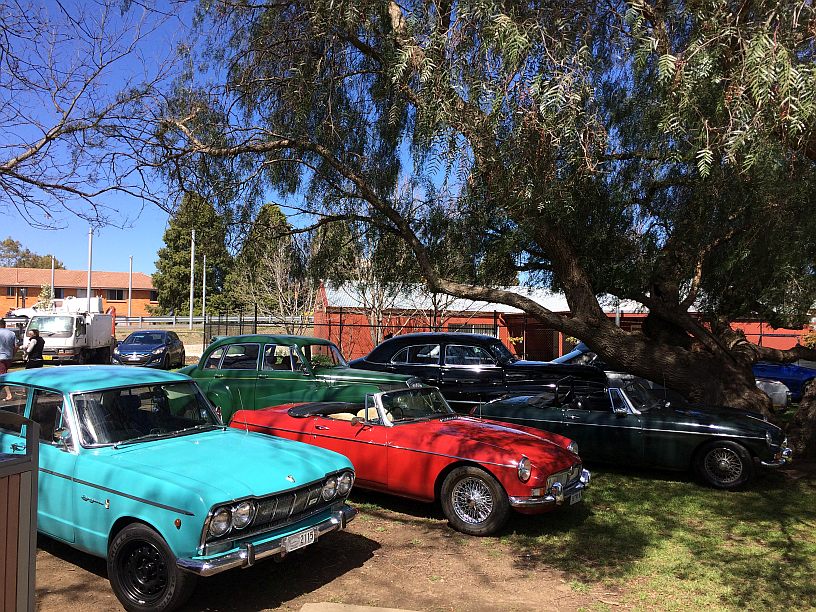 The Prince Skyline and friends at Queanbeyan

Our re-elected President, John Senior, handed out maps listing more than twenty historic and/or picturesque destinations around Queanbeyan. This turned out to be more like a menu than an itinerary, with the only fixed point being our lunch destination at the Riverbank Cafe.

CACMC cars headed out bravely using every kind of navigation from GPS to semaphore. Soon we were scattered across the metropolis of Queanbeyan, travelling in every legal direction, often crossing paths and exchanging gestures of mixed joy and bewilderment.

Eventually most of us found our way to the Riverbank Cafe, hidden in plain sight in the shadow of the main King’s Highway bridge beside the river (the name “Riverbank” was a pretty good clue).

No questions were asked about how many of the waypoints we had actually ticked off, except by Ian Hooley. Ian had earnestly endeavoured to visit them all, and consequently was last to arrive at the lunch venue.

The only non-complete were the Garretts, who had bravely set out in their big 1929 Hudson, but were ultimately defeated by a conflict between large size of (new) shoes and small size of (antique) control pedals. The Hudson still performed impressively in a straight line – as when last seen beetling homeward across the bridge.

Lunch was leisurely and sunny, occasionally ruffled by a brisk breeze off the river. Consensus of diners was that the Riverbank Cafe is a great little destination, where re-purposed shipping containers nestle under a magnificent pair of pepper trees (we tasted the peppercorns still bearing their sweet rinds).

Thanks to John and Pam for introducing us to parts of their town many of us had never experienced.