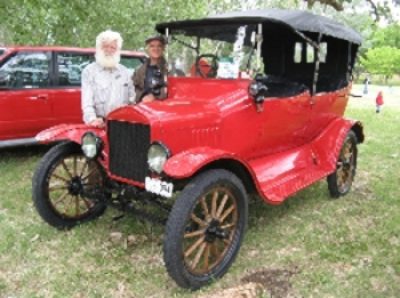 The history that I know of this car started from Kevin Downing of Canberra who owned it for approximately 13 years from 1948 to 1961, doing farm chores, for the last three years pulling a plough. In 1961 Michael Reynolds from Ainslie bought it. He started to dismantle it by removing the mudguards and running boards. He owned it for three years until May 1963.

One lunch time in 1963 I was telling my brothers how in about 1952 a neighbour in Mount Gambier had picked up a “T” Model Ford to cart away as rubbish from a house he had contracted to clean up. He unloaded it in his yard. It had been but down to a tray top ute, but had no hood or windscreen on it. It still had a few months rego in it, but had a buggered bearing. He took the sump plate off and replaced the bearing with the tongue out of an old boot, bolted it all up, fired it up and was going to take it for a run. No one in the company present had ever driven a “T” Model Ford.

I offered to drive it as I had seen the bloke up on the hill drive his Tudor. I pushed the low gear pedal down and started to move forward heading down the driveway to the backyard. As we gained speed it headed for the clothes line, we ducked under that, then the hub cap caught the picket fence and started pinging the palings off as we headed for the backyard dike. Only for Henry Boyd switching it off we would have had that as well, maybe falling down the hole as it was a drop toilet.

We then decided to push it around and point it out the drive toward the road. Four of us climbed aboard and headed for the lakes area of Mount Gambier. After top gear we spent the full afternoon touring the lakes and town of Mount Gambier, so soon learnt how to drive a “T” Model Ford.

Just as the laughter from the story was dying down, the Foreman walked by and Ken asked him if he knew where we would get a “T” Model Ford. He said yes he did know where there was one. We were told about the one Michael Reynolds had. After work we went to the address and found the Ford. After looking and talking we were told he would sell it for £30. I haggled and finally got it for £23. This was in may 1963.

It was a mess—horse hair hanging out of the upholstery and rotted out floor boards floor boards, a few remaining hood bows. But we loaded up all the bits and pieces and drove it from Ainslie to Narrabundah.

The engine was rebuilt on a square of carpet in the lounge room of our rented house in Cygnet Crescent, Red Hill. The linen press and wardrobe were storage space for chrome pieces and headlight glasses and windscreens etc.

Henry, as it is called, is part of the family and is the only foundation vehicle of the Club still owned by a foundation member. It was on the first club run in January 1969 and also the 25th Silver Anniversary celebration. Many runs in between and will still be going for many years to come.