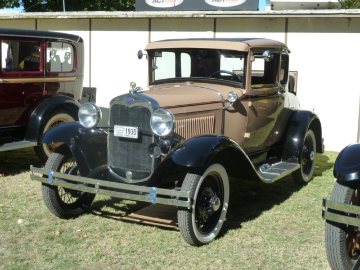 I am a 1930 ‘improved’ Model A Ford 5 window coupe loved and used by Michael Gifford. Why did Henry label me improved? It’s because I have a taller body and radiator to my 28 & 29 older brothers. I had a chequered history prior to my arrival in Canberra that Michael can only guess at.  I am very glad I found him as an owner as the guy in Qld who brought me in from my old home in the USA did not fix up all the trauma from that fire I went through. He just advertised me in Just Cars!  But Michael, with the help of his father Peter, took my body right off and properly fixed up all the damage from my trip to hell and back. Gosh, he even replaced the welting between my chassis and body that had melted right away in the fire, squared up my body etc etc. The previous ‘restorer’ cough! cough! only did my floor and trim and warped panels but not my wiring.

Michael gave me a water pump with non-leak sealed bearings but apart from that I am pretty much how Henry had me leave the factory.  I was real chuffed when your rego people approved me first time up.  I still have my left hand drive and I must say the other cars here in Oz are very polite about my oddness and I know Michael does not find it a handicap.

It was lovely to be out on the road again when he took me to Wheels and I got to talk to a lot of old friends and I also met quite a few delectable ladies from England whom I had not seen before.  We also went on the April run out to Alan Martin’s aussie sheep farm past Yass.  I am happy cruising at 45 mph but confess to getting a little hot under the bonnet and arrived steaming.  It was a bit embarrassing but I don’t think the English girls noticed.  Michael let slip when chatting to Harry Crawford that his father had an Oldsmobile in the very early days of this club and that it only made to Yass on its first run. So I did a bit better!

I know Michael will get me sorted and we will have some great times. Actually, I must say that I really appreciate having him as my owner as it seems he has wanted an A model coupe since he was ‘knee high to a grasshopper’ as you folk so quaintly put it. And I do get lots of support from my compatriot LHD Mustang that his dad Peter bought off eBay.

As told through the pen of Harry Crawford.