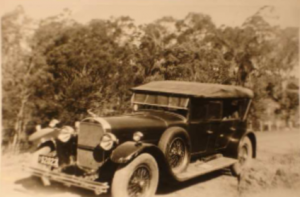 I have no idea who originally brought the car into Tasmania. There is still a faint chance that the second owner’s wife may hold a clue. Her son David Hutchison will ask next time he visits. I wait with hope.

C1940 Geoff Hutchison a civil servant who worked at the Launceston town hall in Tasmania bought this 1924 20/60 Sunbeam. He treated it fastidiously.

But In June of 1948 he sold the car to his brother a Tasmanian cray fisherman Murray Hutchison for the grand sum of 25 pound. Murray wanted the car to use for travelling on his honeymoon. Murray loved the car but worked it very hard. He fitted it with towbar and used it to tow a large trailer. He would boast that he could fit 52 ewes in it and tow them up the Sidling road with the car in third gear. The Sidling is a famous leg of Targa Tasmania (steep and winding) it would have been dirt back then. The poor car was used one day to tow the wreck of a boat back down the sidling, apparently the mast was laying forward out over the car and the driver and passenger would have to duck every time they went around a corner. This wasn’t too much of a problem until the brakes began to fail near the bottom of the hill and the rest of the trip was out of control.

In 1949 Murray and his wife used a smaller trailer to build the new family Home at 1 Murray Street St Helens. Then around 1952 the car was sold to Mr Jack Bishop who owned the St Helens fish factory. The car continued its life of hard labour with

Jack using it on his properties around St Helens and Scottsdale. The car was just abandoned by Jack around 1961 at a property called “Beverly Hills’ at the bottom of the Sidling road near Scottsdale. In 1963 the car was found by Alan D Jones the garage mechanic from Westbury. It took two weeks he and his Wife Verlie to cut it out of the blackberries and get it ready to tow.

It appears to have been sad but mostly intact. Most importantly the original Sunbeam body was still sound. Alan Jones fully rebuilt the car mechanically. It appears that he used a gearbox and diff from a 25 HP car. But all the rest is original. I have the original gearbox, it is a bit broken, but can be fixed. Most of the timber is still original; Alan did a good job of keeping the car as original as possible. The car saw a little bit of club use for the next decade. Its last outing being to Canberra in 1982 where it was still looking great

Alan Jones died November 2001 leaving the Sunbeam to his wife Verlie. Bill de Graaf of Canberra is a good friend of Allan and Verlie and has Known that the car was sitting in their garage in Westbury for the last 20 or so years. The car was languishing, the interior was pulled out, the floor pulled out and the bonnet being pulled apart for repair but never finished, just getting plain old and dirty and unloved. In November 2010 Bill and his wife Mary went to Tassie for the Veteran Rally. Verlie Invited them over for tea and told Bill that she wanted to see the car being used again. Could Bill find a new owner who would put it back on the road. I am very grateful that Bill decided to tell me and no-one else. Because as Bruce Dowel of the British sunbeam register puts it in a recent email

” . You are a very lucky man, the model 20/60 is one of the more iconic models in the Sunbeam range. Finding original ones are in the ?hen’s teeth’ bracket. About 1500 made and only 40 or so survive. (18 ish in Oz.) Yours is a Long Wheel Base Tourer which is not unique, but very rare. Most L.W.B. cars would have carried some type of ?closed’ coachwork. Also, your car seems to have Sunbeam coachwork and as you know importing ?whole’ cars incurred a very high tax rate. The first owner was special, I would look at it being a diplomat?”

I knew I wanted the car so I negotiated with the ?boss” – does anyone want to buy a 1962 Dodge Phoenix. Something has to go. I had only seen some old photos of the car but I felt that it would still be worth the risk of negotiating a deal over the phone. I didn’t want to waste any time because you know what an happen if you hesitate. I asked Bill if he wanted to go for a bit of a drive. How do you get a car that doesn’t run out of Tasmania? Just drive down with a car trailer and some cash and get it. So I booked the spots on the Ferry and found a car trailer big enough to comfortably and safely carry a large heavy car. Then, thanks to a good friend, borrow a suitable diesel tow vehicle.

On the road at dawn for a leisurely 10 hour drive to Melbourne I’m glad we left early because it started to rain 200 kms out. We couldn’tsee much – well except for the semi-trailers passing us at 120 kph, and the sheets of water across the road. Those truckies are insane. Crossing Bass Strait was a bit rough but trava-calm and a few scotches fixed that. We were at Westbury early the next morning. The car not quite as good as I had hoped but still it was good enough to go ahead with the deal. Bill’s son Ronny lives down the road a bit and he turned up in time to help get the car on the trailer and tie it down and cover it, between the heavy sqalls of rain. Many thanks Ronny. Also many thanks Nick for the loan of his chains d-shackles and turn-buckles, the only way to safely tie a car down and much easier Back on the road, more pouring rain and more crazy truckers. I was passed by fully loaded logging trucks on double yellow lines no visibility and I was going 70. Overnight on the boat and back on the road at 7. The load towed well but we still stuck to a cruisey 90 kph, I have heard so many hard luck stories that I admit to being a little paranoid, and Bill wouldn’t let me go faster if I tried. The floods had cut the road at Tarcutta so a long and bumpy trip out through Wagga and Binalong got us home in Canberra with a couple of extra hours.

Mechanically the car is very good, radiator needs attention and the Interior had been moved for some reason. It is not authentic but I will put it back in, it will do for the time being. My main disappointment is the wheels: they are not the right size (20 inch) and the splines had been abused resulting in damage to two hubs. These can of course be re-splined. I am in the market for new wheels. I can have them made in NZ but I will search for some originals first – I will not hold my breath. Does anybody have 21 inch wire wheels with Rudge 52 centres, I need 6. I think they are the same as Vauxhall 14/40 and many 20’s Sunbeams. It will need some paint and lots of refreshing but I don’t intend to do a concourse resto. I think she will be allowed to show her age.

I will let you know how things go.